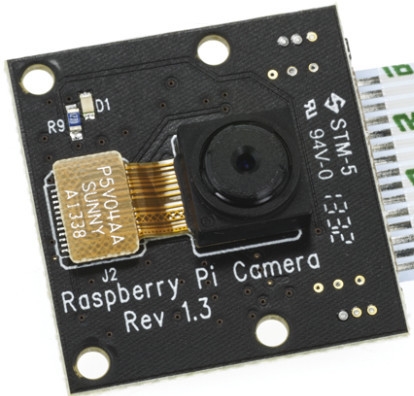 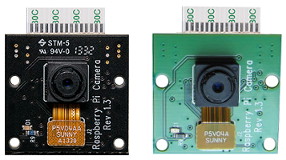 Without the Infrared filter the camera can be used for night time photography, night time security or for any project where the scene will be lit by an IR light. Without a filter the camera sensor can see short wavelength IR light around 800nm which is the IR wavelengths not generated with heat but just beyond the visible red light in the spectrum.
The camera has the same specifications as the standard camera module but has a black circuit board so it can be told apart from the standard green camera board.

The Raspberry Pi NoIR camera module can't be used for normal colour photography as the extra colour range affects how the sensor sees the world. This image was taken with a camera without an IR filter (Not a Raspberry Pi camera). As you can see the grass and tree's are not the usual green but nearly white and the blue sky is darker. (Image by Ashley Pomeroy) Supplied with the Raspberry Pi NoIR Camera module is blue square filter. This is used to filter out all colours except for the near IR wavelengths and has been supplied for checking the health of your plants. So if your not into chatting with your plants to find out how they are, you can take a pictures of them instead. Not such a mad idea as it first seems. By taking a photo of your plants with the Blue filter you can get involved with a project at www.infragram.org looking at the health of plants by uploading your infrablue images. These can then be analysed to measure the amount of IR light being rerflected by the foliage which can be used to analyse their health.

Many photographers use digital cameras without IR filters to create interesting photo's. The camera module has the same specifications as the standard camera module. So it can take images up to 5 mega pixels with a resolution of 2592 pixels by 1944 pixels and video up to HD quality of 1920 x 1080 at 30 frames per second.

The Raspbian operating system comes with three programs to control the camera; Raspistill for still images, Raspivid for video and raspiyuv for raw still images.

PLEASE NOTE:
I have very limited time currently for the comments, so you will probably get a very slow response for questions I know the answer to. If I need to set up a Pi to check your issue or request then I am unlikely to have chance to spend time on this.
I will continue support once I can spare the time again.
Thank you for your interest
JComments